'Twas a dark and stormy night. With my friend Sully backstage meeting the band, it was time for me to hit the Riverboat Days beer tent and get my buzz on. Considering there were so many old people I recognized in the crowd, I had to be slick about it. A bunch of nobodies from high school had the same idea.

Skip ahead to the concert. Seconds before the band took the stage, Sarah Stuzeski (sp?) hooked me up with her VIP pass. Front row to Foreigner baby! Immediately after taking our places at the stage, some hillbilly bitches starting complaining that they could no longer see. This is really the only thing that ever sucks about being tall. Concerts. In an effort to appease, I kinda kneeled down on the railing, yet they still gave non-stop dirty looks and comments. Some people don't understand what rock concerts are all about. It's not like we were at a Barry Manilow show. This was front row to Foreigner baby! 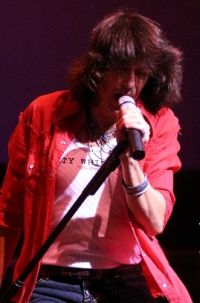 So bang, bang, rock and roll, the band hit the stage opening up with some song that sounded pretty familiar, I think it was "Feels Like the First Time." Whatever. The odd thing I noticed was the girl to the left of the stage doing the sign language to the lyrics. She didn't even have a spotlight on her, not to mention the huge festival crowd spanned the length of 2 football fields. I sure hope any deaf person there had fuckin eagle eyes.

The rocking slowed down as the Mick Jones (the only remaining original member) busted out "Starrider" from the first album. This was the best song of the night, somewhat resembling psychadelic Pink Floyd, and lasting well over 15 minutes. "Starrider" actually made me want to check out some of Foreigner's other stuff (songs that aren't on the radio). Jones then introduced the band, and they all came up to to the mikes to sing an acoustic track. Lame, except it gave me a chance to see Jason Bonham (Foreigner's drummer and son of John Bonham) up close.

As the band came back into the swing of their rock hits, I noticed that my other friend Adam had left my side, and his always-too-drunk brother John was now there. John demanded I give him my t-shirt to throw on stage, despite the staff ladies (moms of friends) telling him not to do it. Fuck it, I was wearing a rain coat anyway. In a perfect throw, he winged my t-shirt onto Thom Gimbe's shoulder, who then proceeded to keep rocking "Dirty White Boy" with my attire attached. John, naturally, got kicked out.

I also noticed that Sully never made it to the stage, and his mom came in his place. She had seen Foreigner back in the 70's so this was nothing new to her, although she really got going during "Urgent", and somehow actually knew all the words.

Considering Foreigner has so many hits, the show was dragging on a little, hit song after hit song, everyone was just waiting for "Juke Box Hero" (the only song I even knew was theirs). Then it happened, the stars were in their eyes, the guitars hit, and "Juke Box Hero" was in full effect. Besides being the loudest song I've ever heard, it was somehow almost the most kick-ass. They played the chorus a few extra times to please the crowd, and I noticed that Bonham's beat had changed into something that sounded strangely familiar. Yep. Led Zeppelin's "Whole Lotta Love" a.k.a. fucking tight. Foreigner should really consider becoming just a Zeppelin tribute band, as they rocked that song better than a million shit cover bands I've seen before.

After the Zeppelin tribute, Kelly Hansen looked right at me - in the eyes - and stated he was going to slow things down a bit, singing a song for anyone who was missing someone tonight. Ugghhh. Even sign language lady was losing interest. Sully appeared just as the band started their worst song, "Waiting For a Girl Like You." At least this gave us a chance to catch up on old times, despite the hillbillies again complaining that they couldn't see.

He stayed to watch "Say You Will", and took off during the intro to "Hot Blooded", which by now was guaranteed to be their last song, due to the after-the-show-based lyrics. Even though my knees were killing me from crouching on the rail, I decided to ride it out in hopes of grabbing a guitar pick after the song. To my surprise, Bonham himself walked to the edge of the stage and threw me his signature, beaten-to-hell drumstick. Not a bad souvenir. The drunken, bitchy hillbillies behind me started complaining yet again, saying I ripped the stick out of their hands, and demanding I give it to them. Shit. My only defense was a few firecrackers in my pocket, and who knows? These Foreigner fans could have guns. I got the hell out of there as some lady was screaming at me about how she deserves the stick because she saw Zeppelin on the Physical Graffiti tour. Wow. Tough crowd.

Supposedly, the band was going to party at McKinley Street Taverne, but, considering they were so old and had too many damn hit songs to jam out, they were too tired to go. Oh well, I probably have nothing in common with those guys anyway. Instead, we all went over to the retard school to shoot off massive amounts of fireworks, with the stipulation that anyone could touch my new drumstick for $5.