Forget everything you know about U2. Forget Bono holding up his American flag jacket on TIME magazine. Forget the ipod commercials. Forget the 90's altogether. But DO ask yourself WHY is U2 everywhere I look? Why are they seemingly the most annoying band in the land? Simple: They made a true masterpiece in the 80's, and, since have been copying that album over and over again. Each new U2 album is another bad impression of The Joshua Tree.

I, for one, still like the band. The difference between U2, Dylan, and The Stones is that U2 still makes decent music. Sure, many are simply pop songs for the radio & The Grammy's, but the band is beyond the point of artistic integrity (been there, done that) or "selling out" (how can the richest band in the world hardly care anymore?). However, I do understand why people hate them.

Besides the current era, the mid-80's was probably the worldwide lowest point in music history. Sure, there were some decent, smaller albums, but most everything in the mainstream was synthy, recycled, big-haired vomit on a cassette. The Joshua tree was pure beauty in an age of pure ugliness. And, even though it didn't save music by any means, it did change the way mainstream music was dealt with. Many bands, real bands, were now on the radio once again. OK, yes, this did lead to the success of many hated acts such as REM and Coldplay (aka Levy), but back then traces of U2's sound could easily be found in The Pixies and Springsteen and later The Pumpkins and Radiohead.

The album itself opens with 3 songs you already know by heart. These 3 songs are what changed mainstream radio. A guy named 'Bono' from Ireland was now singing at your prom. Amidst these pop songs, though, is U2 setting up their poetic themes of life and death (wet and dry) through allegory. In any case, what makes the album truly great are the songs and themes that follow.

The Joshua Tree doesn't truly take-off until the 4th track "Bullet in the Blue Sky", a song about the U.S. arming of rebels in El Salvador, which can be easily be applied to any "skirmish" a dominant country gets involved in. An interesting listen when considering the war in Iraq, and still my favorite political song to date.

The band then continues to hint at the paradoxical oppression of the U.S. by using American folk and blues to influence the next 4 tracks. Closing your eyes while listening will instantly associate The American frontier with hard themes such as heroin addiction and ironic higher-power montage. The one flaw of the album, Red Hill Mining Town, was placed on the album instead of The Sweetest Thing (re-released in 2000). However, I sometimes think that including Red Hill instead of another billboard singles hit might have driven their point home even further.

The album finally closes with U2 being themselves, at their best. Slowing things down to bring out the genius of The Edge's new-found-sound, they drive home the flood-meets-desert theme in One Tree Hill, ending with the beautiful "Oh Great Ocean..." gospel verse. Bono's confidence goes nowhere as U2 re-invents the wheel again during Exit, and they bring in their entire arsenal of themes and influences since the first track of the album. 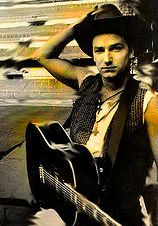 In classic U2 fashion, they end slowly but leave hope. Mothers of the Disappeared leaves us with an anthem to The Mothers of the May Square, associating these women to the band and ourselves.

This was the first album (tape) I ever owned, and to this day on of my favorites. If you are a U2 hater (and many are), consider this album coming from a time when Bono wasn't on the cover of any magazines, but, semi-underground, was just as active in stopping violence through politics as he is today. U2 performed at Live Aid 20 years before The Gap's red t-shirts. U2 were just four drunk guys from Dublin who dressed as such, instead of wearing flashy costumes. No ipods, no sunglasses, no devil horns, The Joshua Tree is U2's best work. Did they let it get to their heads? You decide. 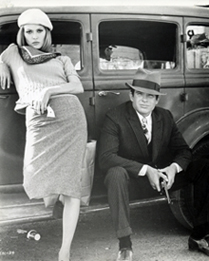 The only movie more people lie about seeing than Casablanca: This classic road trip is chock full of your fun-loving antics copied in several lesser progeny. Farmhouse shootouts, quaintly quipping bank robbers and backwoods folks hootin' and hollerin' shows the DNA of Butch Cassidy and the Sundance Kid, The Dukes of Hazzard, more recently O Brother Where
Art Thou, Natural Born Killers and, most famously several Hanna-Barbara cartoons.

Is this movie more than just a good time? Yes, it tries and mostly succedes in undressing its rambuncious stars and showing a vulnerable underbelly, flawed and hiding behind their exciting adventures.

Good times points - 6. The jokes are soft and limp - nothing laugh-out-loud funny, with the exception Gene Wilder who has a brief cameo. The shootouts do not have the beef that a modern Hollywood shoot out has but they have some good quick moments, ramming cars and the getaways are tense. Bonnie unloading a tommy-gun out a cottage window at the coppers was a great moment. 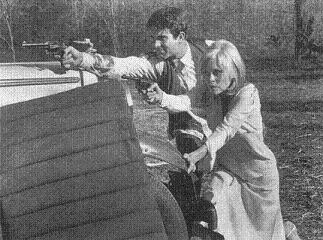 Depth points - 8. As the adventure of the Barrow Gang slowly degrades itself, you definitely feel it is more than getting shot up and running out of ammo. As the times get tough, you get to watch as they de-evolve into children, calling for their momma and trying to pray a God they had lost. The jolly nbanjo and fiddle keep playing, but you don't get the impression they can hear it anymore. When they are betrayed by one of their number, there are some brave performance moments for most of the characters.

Full-Movie points - 5. Sure Bonnie and Clyde has some good scenes and good moments, but that's what it has - good parts. It definitely has a repetitive element to it. Robbing, driving, staying the night somewhere. Nothing but a few nkey parts really stands out to it. As far as a great movie, it takes a break sometimes. A good example is at the beginning they have some excellent camera work, cutting around Bonnie's room as she sits in the termoil of her boring life. Never again do you see any of that play or creativity nin the camera work - they just seem to want to show you what they can do sometimes. 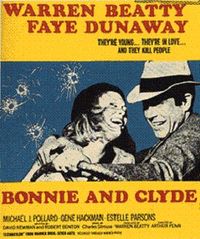 Slam-a-Jam points - 6. By far the most important points - Slam-a-Jam points are awarded through the pleasure Slam-a-Jam derives from the film. Good parts that I will remember, surrounded by the typical Dukes of Hazzard, which they could have done better. What probably elevated them from a 5 to a 6 was the presence of Gene Wilder. I would doubt myself if I tried to give a Gene Wilder movie less than a 6.

Average them together and you get a 6.2. Not bad.

Once again, Korea proves that they are more than just a suburb of China:

So yesterday, I finally ate at Chipotle for the first time. Most of my four remaining friends I have can't believe it, but it's true.

I got food poisoning in Monterrey from some sort of fast food mexican joint that I assumed was Chipotle. I got so sick I actually shit my favorite shorts and had to throw them away in a gas station. Needless to say, I haven't been to excited to try Mexican fast food again...

Yet, it came to my attention recently that it wasn't Chipotle that caused me to crap my pants. It was, in fact some other chain restaurant rip-off. So, I decided to give Chipotle a shot.

First thing I noticed was the ease of the whole ordering process. It's set up like a Subway, but with Mexican food instead of vegetables. Not too creative, but serves its purpose. Quick, easy, painless. Just point to what the hell you want on your burrito, and then the guy makes it and folds it nicely. That's how it works.

My friend Mylo informed me that you can get free drinks if you say you are in the military. I usually would just steal soda by asking for a water cup, but considering he had a Marines Reserve ID card, it was a sure thing. Sweet free Dr. Pepper. Not to mention the fair price of just over $5/burrito, an unbeatable deal.

The condiments section was nice. Everything I needed. The only complaint is that there are Coke products instead of Pepsi. Taco Bell has taught me that, although Coke goes best with burgers, Pepsi goes best with burritos. That's just the way it is.

The food: good. Not quite as fat-ass inhalant good as Taco Bell, but a little more authentic-tasting. Which, in my opinion, is a bad thing. But it was still American enough to taste pretty great, and definitely worth the low price.

If Chipotle started selling Pepsi instead of Coke, and added fire sauce as an option, it could easily beat out Taco Bell. But, it is still a great restaurant for thinking outside the bun, and I'm sorry I didn't try it sooner. 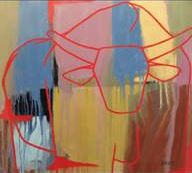 I am not really a big fan of ice cream. Never was. So as I quietly ate my Amy's Ice Cream the other morning, I already wasn't in the best mood. Once I saw the art on the walls, I was in a worse mood. Cows. Cows I say. Cows scribbled over random color. Corporate art at its worst.

We made fun of the art for awhile, laughing at the fact that Amy's had actually posted up 3 different works of cow art (seemingly because cows make milk, the main ingredient in ice cream).

We left the place and continued on with the cow jokes all the way home.

Somehow, I found myself at Amy's a few days later getting a burger. As I waited 20 minutes for them to make their "fast food", I began to look a little closer at the ridiculous cow paintings. That was when I saw it. There was a pricetag on these paintings. They were actually for sale! I thought it would be funny to see a $200 price-tag attached, but to my horror, the price tag said $1600. What?!!?!

Now, I don't claim to be the greatest artist in the world, but I could literally draw these same cows when I was in 2nd grade. The color scheme in the background may have taken about a 4th grade skill level in art, but, either way, I didn't try to sell my elementary school paintings for the price of a used Honda. They got magnetized to the refrigerator for a month, not put in a public venue with a price tag. 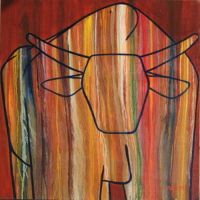 I had to find out what type of moron would actually attempt to sell this garbage. The price tag said Jerry Allen Brem. My new least favorite artist. I, of course, raced home to look him up online. He must be a famous artist and these cow paintings were just a huge practical joke!

Nope, all his paintings are the same cow, with different colors behind it. When asked why he only paints cows, he responds, "I started painting cows as a way to bring art to my friends.  We lived in an environment without art, a small town with mostly working class folks."

I think a small town with bad taste would be excited to display anything with paints, colors and cowboy crap, but even traditional rednecks shouldbe able to tell the difference between cheesy artistic paintings and complete bullshit.